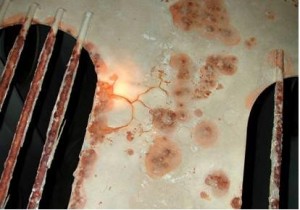 While iron and steel are very strong materials, they are also subject to rusting and corrosion that will weaken them over time. Rusting generally begins on the surface of the metal as it starts to oxidize or corrode. If left unchecked, the rusting will continue into the metal until it weakens its structure. The rust will eventually eat all the way through the metal and turn all of it into the equivalent of dust.

Removing the built-up rust can be a time consuming measure that will only have a temporary effect. However, you can prevent rust from occurring by applying a rustproofing material on the surface that will effective stop the corrosive process from beginning. By using the right type of protection such as that provided by Rust Bullet, you can keep metal surfaces resistant to the corrosive oxidation that would otherwise quickly wear it away. 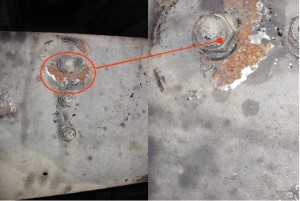 The rusting process is caused by oxidation or the metal being exposed to oxygen. By coating the surface with a material that prevents it from coming into contact with oxygen. You can stop the rust from forming. In most cases, friction from the air or whatever substance comes into contact with the agent will wear it away which means that it will need to be re-applied.

Many phosphate conversion products are used to coat metal surfaces which prevent the oxidation from occurring. Galvanizing the metal is also a common procedure as well before the coating is applied for extra protection. This is commonly used in automobiles to help prevent rust from forming on the metal surfaces which will quickly start to corrode if left unprotected.

Although there are many industries that need their parts protected from the corrosive process that will weaken and destroy the metal, the automotive industry is arguably the most common given the exposure to wind and water that vehicles undergo on a daily basis.

There are actually different types of coatings that can be used to prevent the rust from forming with paint being a common one. Paint is generally the outer barrier that must be penetrated first before it gets through the undercoat and exposing the metal itself before rust can form. On the undersides of vehicles is an under-seal which can provide further protection for vehicles.

How Rust Bullet Works for You

🚙 🚚 Rust Bullet provides effective protection to prevent rust from building up on metal surfaces. Rust Bullets offers exceptional bonding with metal that is often lacking in other types of rust protection. The materials that make up the product are designed to resist friction and bond better with metal so that it maximizes the protective surface.

By providing a rust proof layer over the top of the metal, it can stay strong longer and perform the tasks necessary. In the middle part of the 20th century, vehicles use to rust out far more quickly because of the processes that were used to protect metal surfaces. Today, Rust Bullet has become part of the overall protection that is provided to such surfaces so that oxidation does not occur.