Metal is a material that can add an incredible touch of beauty to all kinds of projects, but it’s also one that needs a little bit of TLC if it is to withstand the pounding it takes from the elements. All metal structures, big or small, will eventually fall prey to rust and corrosion, but just how long it takes to actually happen can depend on a number of factors. You can choose to keep an eye open for signs of that spreading orange menace, or you can choose to nip it in the bud early by coating your metal surfaces with rust paint such as Rust Bullet.

If you are in the camp that believes rust to be a minor irritant, you need to look at figures released by the National Association of Corrosion Engineers. They calculated the direct cost of metal corrosion to be in the $250 billion per year mark, which is a number that represents 3% of the GDP of the United States. If you also factor in other costs like cleanup, litigation, and loss of productivity, that number balloons to $550 billion annually. While some of tis corrosion is visible to the naked eye, the same cannot always be said for rust that has managed to worm its way under the covering coat of paint. It is there that the real damage is most often done. 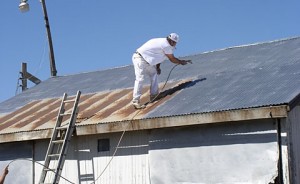 Research has been carried out at Battelle Memorial Institute with the goal of finding a way to combat rust. What they may have discovered is a miniscule bead that has the appearance of a fine white powder, and which may end up being the first line of defense against corrosion. What happens is that these tiny beads start to glow when they are in the presence of the oxidation process. The bead then opens up and releases a chemical that goes to work in filling the cracks that may have opened due to the appearance of corrosion.

This all brings us nicely back to Rust Bullet, which is a paint that has proven to be effective in protecting metal against corrosion for ten years or more at a time. The beads can be mixed in with the primer paint and coated on the metal so that you essentially have a double layer of protection. The Rust Bullet paint is already effective at preventing corrosion, but of a little does happen to take hold, the beads will light up and let maintenance folks know that there is a problem that needs to be attended to.

The research and development of the beads has been going on for almost a decade now. The initial inspiration came after the US military started to complain about problems with rust on the outer skin of their aircraft. The beads have already been successfully tested in military vehicles at Camp Lejeune in North Carolina. The goal is now to make the product available commercially, which could mean billions of dollars in savings each year. For now, though, you can still rely on the rust protection delivered by Rust Bullet.