You are here: Home / Australia / Sheds and Bridges protected from Rust and Corrosion Australia 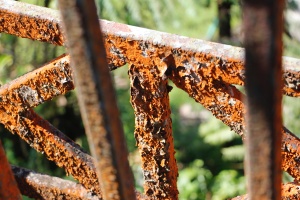 Advances in metals have made items such as sheds and bridges, which before were created from wood, to not only be stronger, but have allowed for different shapes and sizes to find a wide variety of conditions. From the sheds in backyards around the country to mighty bridges that span rivers, advanced metals have done wonders in reshaping our world. However, in Australia in particular, rust corrosion has been a huge issue with such structures.

The Issues with Rust

Metal that is subject to oxidation does not have to be in contact with water to start the rusting process. Even if located many miles from the ocean or water source, the metal itself can start to corrode due to the water vapor in the air. The closer to a water source, the more likely the metal is to start corroding because of its proximity.

Famous structures outside of Australia, such as the Yeongjong Bridge in South Korea, are subject not only to the water vapor in the air, but from the salty ocean that it covers from the city of Inchon to Yeongjong Island where it provides safe travel to a major airport. Despite being an engineering marvel, the metal used to construct the bridge is already subject to the corrosive elements of oxidation.

The water vapor in the air, precipitation from rain, sleet, and snow, and the saltwater below the bridge all contribute to the formation of rust. Without protection, the bridge itself would become unusable in a short period of time. With vital parts starting to corrode and the inherent strength of the metal weakening, it would not take long before the bridge would have to be shut down.

It’s not surprising that the Yeongjong Bridge along with many other major metal structures are covered with a rust protection product. A product designed to prevent the surface of the metal contacting with the oxidizing elements of the atmosphere. More about Rust Bullet and the Yeongjong Grand Bridge, South Korea.

Along the coastline of Australia, rust corrosion has been a major issue facing all types of metal structures. Getting the right protected coatings makes all the difference whether it is the sheds holding your gardening equipment up to bridges that let you cross rivers and channels when you travel. The right rust protection starts with a product designed to prevent moisture from contacting the metal. Corrosion protection, industrial corrosion or marine corrosion!

Products such as Rust Bullet are crafted from materials that stop moisture before it reaches the metal surface. This non-porous coating provides ample protection, especially the special pigments that are designed to prevent corrosion from forming at all. Plus, what makes Rust Bullet special is that the formula used will wear away first to protect the surface where it has been applied. This means increased longevity of the product itself.