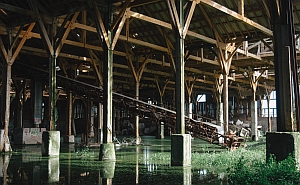 The detrimental effects of rust cost both business and homeowners of Australia countless amounts of money each year. Successful rust proofing for vehicles, equipment, and industrial buildings is an essential part of regular maintenance in Australia. By better understanding the effects of rust, appropriate methods of rust protection can be employed to preserve equipment, buildings, and vehicles for a lower cost.

What is Rust – Industrial Corrosion?

The rust on the Industrial buidings that you see on metal surfaces is iron oxide. When you see iron ore in its natural state, it looks like rust. Since steel is made from iron ore, when it is exposed to oxygen it begins to breakdown and return to its natural state. The industrial corrosion will occur for several reasons.

In addition, when two different metals are put together, the rusting process may occur depending on the type of metals present.

For those who own industrial buildings, the damage rust can do is considerable. This means that building owners along with the workers inside must take the right steps to minimize the damage. The cost of such corrosion may affect the following.

Rust has been a contributing factor to facilities being shut down and repairs that become far more expensive as rusted metal parts and surfaces must be replaced.

Electrolytes contribute to the Rust in Australia

For those who live along the Australian coast, the presence of salt in the water accelerates the rusting process. There are other elements as well that can speed up the process of rusting in metals which include the following.

There are methods that can be employed to slow down and even stop the rusting process from starting. Such methods for effective industrial rust coating include the following.

Adding Secondary Metals: For example, placing zinc or magnesium next to steel will protect the steel from rusting.

Lowering Current: Equipment that generates current can reduce corrosion, such as in metal pipes and tanks.

Covering Surfaces: Using finish coatings and primers can provide a barrier between the metal and the corrosive elements.

Effective rush protection in Australia starts with the appropriate inspection and maintenance using the right products. This means that vehicles, equipment, industrial buildings, and all items that are crafted from metal and exposed to water vapor need to be protected. You can start by conducting an inspection of your property, identifying the areas that need to be addressed, and taking the proper course of action for the best in rust protection.

For more information on all Rust Proofing contact Rust Bullet