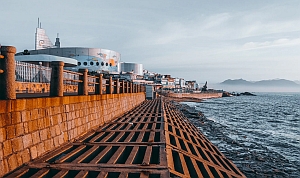 As anyone who lives on the Sunshine Coast can tell you, rust is a real issue. The proximity to the ocean means that steel and iron are exposed to the humidity which causes oxidation. Without industrial rust proofing protection, the result will cause pitting and weakening of the metal integrity. This means that unprotected metal parts, such as found on vehicles, inside the structure of buildings, any other metal surfaces become vulnerable.

The presence of the salt in the air from the ocean increases the speed in which the oxidation takes place. This is because the salt acts as a conductor which helps transmit the humidity to the exposed metal. Add to this the heat of the summer in Australia and you have good reasons to apply the proper protection to metal surfaces.

How Rust is formed near the water in Australia

The oxidation process is surprisingly complex given how widespread it is. Basically, the combination of water or water vapor and oxygen are required to start oxidation of iron or steel which is an iron-based metal. When exposed, the ions inside the iron are transformed into ferric ions.

The ferric ions then combine with the oxygen in the air to create ferric oxide. The potency of the ferric oxide will depend on the humidity of the air. The result is that the ions will transform into an oxide which is the rust you see on metal surfaces on the Industrial buildings in Australia. It is a corrosion based on organic acids that weaken the metal at an ever-increasing rate unless the process is either stopped or prevented.

How to Prevent Rust from forming on Industrial buildings

The complexity of the oxidation process provides different ways to stop rust from occurring. The most common type of inhibitor coats the surface of the metal so that the oxygen and water molecules do not come into contact. These are liquid-based inhibitors that not only repel the water from the surface, many will also have additives that reduce the chances of corrosion if for some reason the metal begins to oxidize.

If you notice rust on the surface of the Industrial building, it can be removed using a friction-based process. Sanding away the rust is an option which removes most of the affected particles. Once the surface has been cleaned, then rust proofing products can be added to prevent any further oxidation. The addition of industrial products to the surface of the metal must be quick to prevent additional rusting.

Once you have covered the surface with a rust-proofing material, such as oil, paint, or other liquid-based product, then it should be inspected from time to time to ensure that it is still in place. Erosion can remove the protection from the surface, so periodic inspections are required. If you can keep the metal surface in a protected area that reduces the level of humidity, all the better.

If you live on the Sunshine Coast, then you will want to have an industrial rust proofing product around to protect metal surfaces. The cost of prevention is a fraction compared to repairing or replacing metal parts and surfaces from the dangers of oxidation.  For more information contact the team at Rust Bullet.